Chapter 2 begins on June 3rd at 02:05am Lioden time.
To quickly navigate through the storyline pages, some buttons are styled with underlines and will jump you ahead to the next page for that specific branch. It is advised to use these buttons to have the best understanding of the storyline.

If you are on a device that is compatible with keyboards, you can use the left and right arrow keys (  ←  →  ) to switch between storyline pages.

You approach the temple to check on Anubis's vessel, but this time the entrance does not seem so quiet and dark. You see flames flickering inside, as if someone started tending to the temple! The sight gives you a tiny feeling of butterflies in your stomach. Is the god awake? 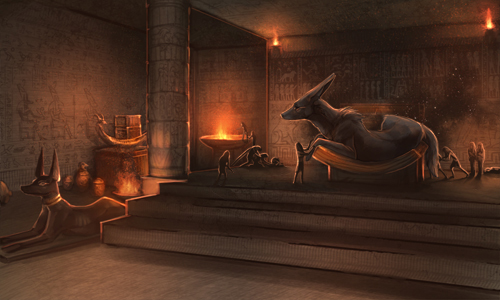 You rush inside, seeing ancient braziers lit with fire. Everything looks alive this time! You walk into the main chamber and see the godly vessel sitting on a gilded throne, relaxed, and very much alive. A magnificent dark wolf, with jackal features such as elongated ears forcing themselves through Anubis's energy. Around him, dozens of small, confusing servants are scattered, preparing important tasks of cleaning the temple and adorning the god with a smoking cloak. The little creatures seem to be made of stone. How are they moving? You realise it's probably not for you to know. You look back at Anubis.

Anubis looks at you, lost in deep thought. The way his eyes pierce you, the way they seem to reflect the night sky, makes you think that whatever godly powers he has must relate to the everlasting night beyond your comprehension. Will they be enough to get rid of the Serpent? You recall the chasm being monumental in size. What sort of creature came out of it? Will Anubis manage to defeat it with this slightly-larger-than-a-jackal wolf body? As you think about the possibilities, he seems to be quietly and patiently letting the little servants dress him.


Are you happy with your vessel?
Page 3 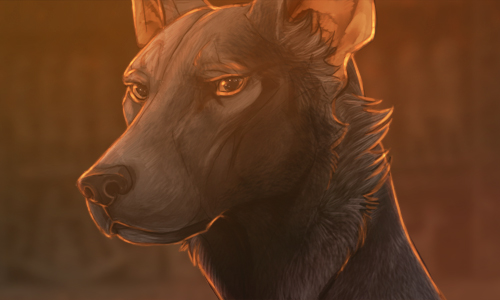 "I do have more trust in this body to withstand a fight than I had in my old one." When he speaks, it's like a snake slithering through gravel, as the hoarse voice is quiet, low, and crackling. "It is a bit depressing to know that, naturally, I wouldn't be of any use. My story is now filled with the frustration of a god whose skill isn't useful in anything other than after death touches you, when I would protect the tombs, embalm the dead, lead their souls to the afterlife, to the new dimensions where their good and bad deeds would be weighed against them. I have never learned how to prevent death, as it surrounds me every day." His words do not fill you with hope. They don't rile you to kill the Serpent. It's quite disheartening to see him like this. Maybe if he learns what happened outside, he'll get a jolt of motivation.


Please my Lord, let me show you what happened
Page 4 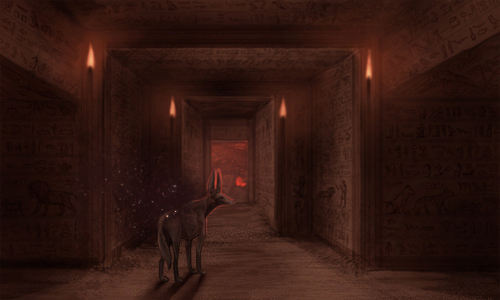 "Yes, let me see how dead the world is now," he mutters, stepping down from the throne. You huff, preparing yourself mentally to deal with his "upbeat personality". You check out the wolf body as he passes you, expecting it to be the only chance to look at a god from up close. The fur is covered in brown and grey patches, with black and shining gradient coming down from its head, as if Anubis's natural form was trying to seep through Wepwawet's vessel. He has no armour, no supernaturally long claws... he looks pretty canine-like for a deity. As you check out the long, fluffy tail, Anubis stops in his tracks and gives you an apathetic look. "Please, lead the way. It's your world, after all." 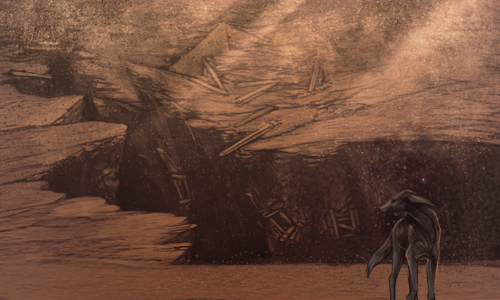 You cough nervously and move to the front, leading Anubis out of the temple towards where the obelisk fell, so that you two can have a good view of the landscape. As you pause to let the freshly-revived vessel catch up, you notice it looking around in disbelief. So many temples are devastated. He must realise that those gods, his old friends and family, lost important vessels and places of worship. He may never see them again. It must be horrible... He probably feels very isolated. You don't really know him, though. He climbs toward you, taking a seat next to you as you two gaze into the distance in silence. You hear him whisper to himself. "All these dead gods. All these dead animals. Horrible. When we're done here, I will find you. You will never be lost." 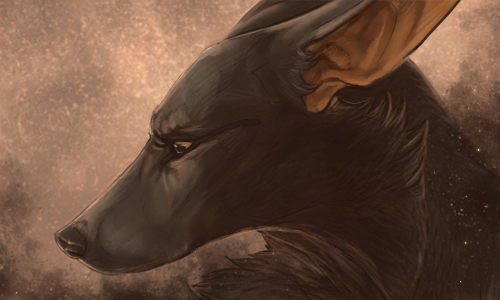 "I cannot imagine the imbalance in cosmic energy, the massive lament of departed souls, and the negative impact on the universe if the Serpent destroys this whole world in such a horrible manner. Swallowing the sun... the perpetual darkness. There's enough of it out there behind the sky. We should protect this place." He narrows his eyes. You feel excited again. It looks like he got the impulse to act.


How will you kill the Serpent?
Page 7 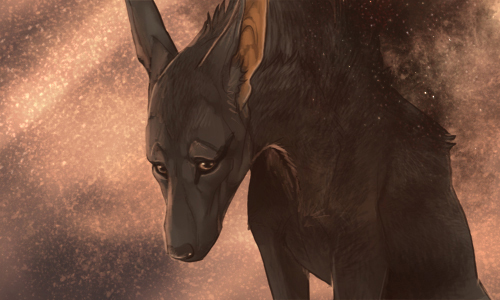 Anubis hangs his head and closes his eyes, as if this were a hopeless fight. "The Serpent can never die. It cannot be killed - only... temporarily defeated. He is an eternal chaos, a representation of the void of the universe and the death of the sun. But, this is why Ra has embarked on this journey with warriors. Every time the darkness came, they have defeated it, the sun prevailed, life was restored. The blessing of sunrise was a reminder that we're not lost in the void of the universe. I... was never there. I am deep in Duat, weighing hearts... the heart of the Serpent is so heavy, it's like a black hole. What lies inside is terrifying. But... you have chosen me, when true warriors had their temples saved and accessible. Why?"


You're one with death. I believe you can bring it to the Serpent
Page 8 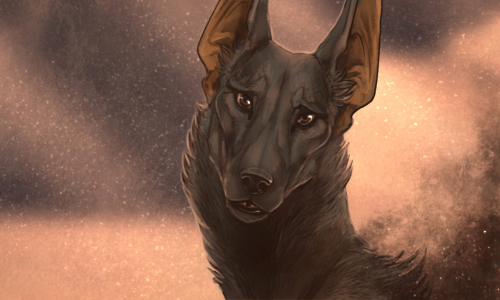 "I... hm. Maybe I could." Anubis peers at you, looking confused, but you can tell he's filled with a sudden surprise and wonder. He looks at his paws. They aren't used to fight like the paws of a lion. Maybe he doesn't need to fight at all? "I need some time to get used to my vessel. It feels weird, and the control I've established isn't very strong. Perhaps I could train a bit to learn what I need to survive and how to... bring death, like you said. I am sure you'll help me. We could fight together, against some slithering minions, and I could better learn how to summon the breath of death upon them. This will help me learn how to do it with the Serpent in full scale. Could you take me with you for a while?" He looks at you, hopeful this time. A huge, tight feeling in your throat loosens up. Thank the gods he came around. 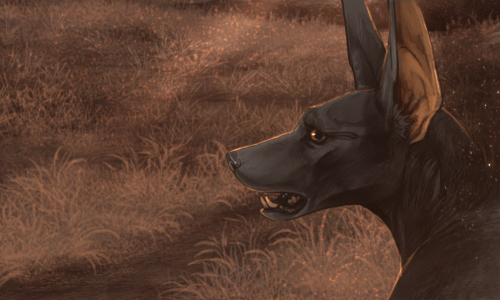 You both move down from the risen ground back to the lands, dark and clinging to life, with the dark sky covered by murky clouds. Just when you wonder if you'll have to babysit the wolf that's truly a sad puppy on the inside, he nudges you gently. "Maybe we could invent some challenges every day? I am sorry to take your time like this. I promise I'll make it up to you. I will ask my Ushabti to trade some of my artifacts with you. I hope it won't be too much of a bother." You take a deep breath and nudge him back. He should be more confident. It's funny how you expected this god to lead you to victory. Maybe the gods have their doubts, just as mortals do.


I'll be by your side. It sounds like a great plan
Page 10

This ends Chapter 2. From here, you can complete Daily Quests each rollover until Chapter 3 unlocks on June 20th at 02:05am Lioden time.
Click here to view the directory for the Rise of the Serpent storyline.

Go back to Chapter 1 - Anubis.