So, you're interested in these adorable, little critters that Battle Beetles are? Splendid! In this guide you'll learn the basics about the Battle Beetles!

Beetles pop up everywhere in explore! While exploring, you may stumble across a lone larva buried in the ground. A perfect opportunity to grab a new friend home, no? There is a 50% chance that your attempt to grab a beetle larva will be successful. Upon doing so, you will receive a beetle larva of random species, gender and colour!

If you managed to grab the larva, you will find it under your "Unsorted Mound". The Unsorted Mound is displayed under your Den page, on the bottom where your Mounds are located: 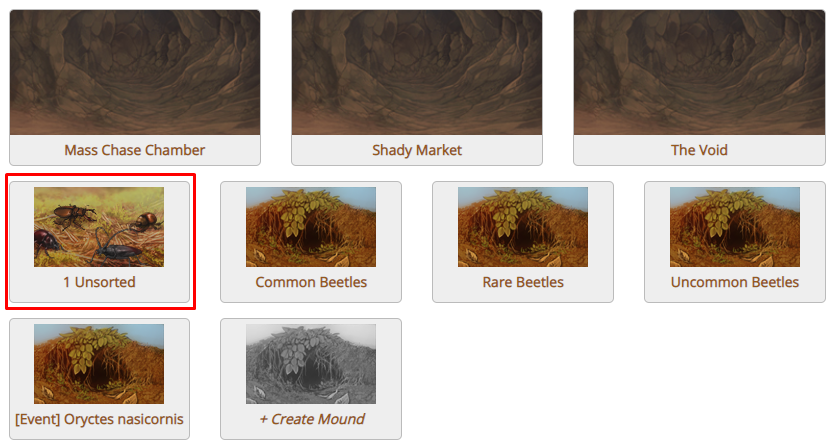 If you're looking to obtain beetles of specific species, colour or gender, your best bet will be the Trading Center! You can purchase beetles from other players or have them transferred to you directly. In order to find beetles that are being sold, head over to Crossroads, then go to the Trading Center and under "Filter Options" choose "Beetles". You will see the following filters available:

Once you've chosen what traits your dream beetle should have, click the "Search" button in order to sort current beetle offers via your chosen traits! Exciting! Now you can see all offers matching your results:

Simply choose the trade offers that interest you and buy a beetle that interests you! Your beetles will appear in your "Unsorted Mound" once bought.

In order to transfer beetles between accounts, go to the Transfers page of the Trading Center (or click on the "Send Gift" button on the desired player's page) and choose the beetles you'd like transferred, then hit the "Transfer" button. Simple as that!

Beetle Tokens, once obtained, can be found in your Hoard, under "Other" category. Once chosen, you may choose to "Use" the item, which will result in granting you one beetle larva out of the token's species, with random gender and color variation! The larva will be found under your "Unsorted Mound". Remember that it is required that you have a beetle slot open for your new larva! 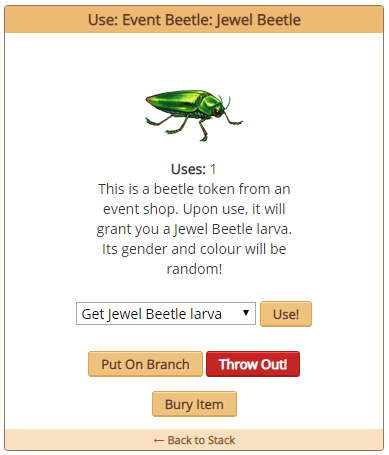 There are quite a few ways of obtaining Beetle Tokens. First, let's concentrate on where to receive such tokens.

These Beetle Tokens can be purchased for 1 GB each and can be found in the Oasis.

These Beetle Tokens can be purchased for 9 MT each and can be found under the Gorilla Enclave Shop. Most of these species are not actually beetles - they are other insects, but they act the same way as normal beetles! Variety galore!

The following Beetle Tokens can be received from various Event Shops or other activities realted to their Event. This way, you can acquire some popular beetles used as event currencies on Lioden or some other interesting species!

Additionally, Lamprima aurata can be dug up from the Wallowing Pit once Tier 3 is opened during the December Event. 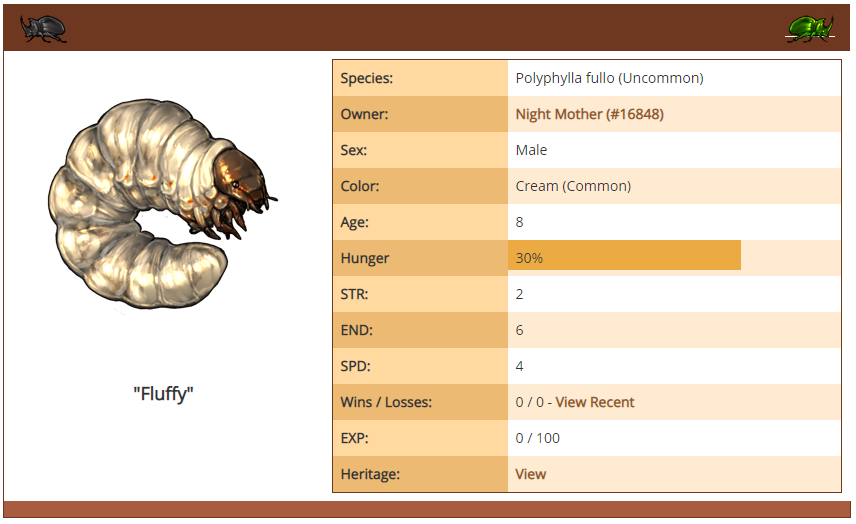 Now that you have a beetle, you need to know what to do with it! When you first get one, they will be in a larval stage, and will stay like that for 10 rollovers. Once they turn 11 days old, your larvae will grow up into an adult beetle. Larvae are hungry little things, so their hunger drops by 30% every rollover. If it reaches 100% hunger, your larvae will die, so make sure to keep it nice and full!

Items that may serve as food for beetles are as follows:


In order to feed your larvae, scroll to the bottom of your beetle's panel, then navigate to the "Feeding Larva" section. From there, you will be able to choose a herb or watering item to feed them with! You can find beetle food commonly in Explore, purchase it from players, or if you run out of food, simply go to the Beetle Grounds - from there, you will be able to buy a random herb for 20 SB each.

Once your beetle reaches 11 months (rollovers), it will become an adult. They grow up so fast! Adult beetles live exactly 20 rollovers (months), meaning they die once they are 31 months (rollovers) old. Female adults are utilized for breeding more beetles, as they cannot battle, while Males can be used for reproduction and participation in beetle battles. 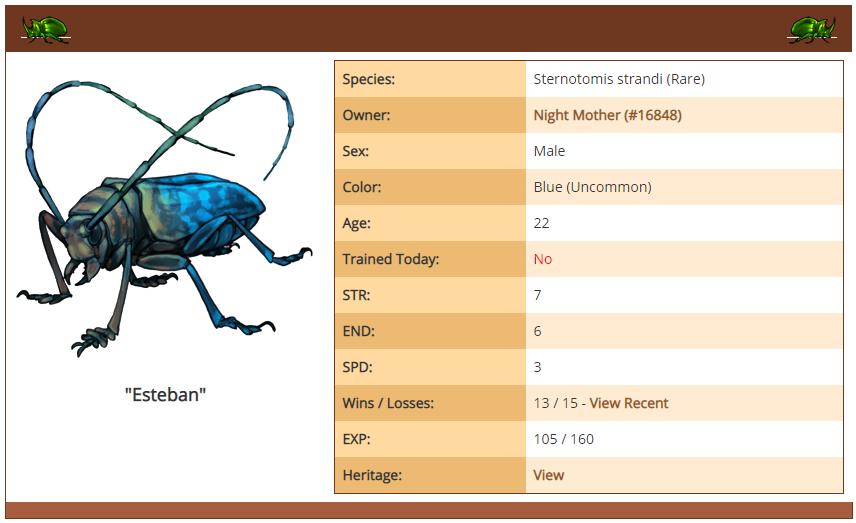 On your beetle's panel, you may find basic information about your beetle, including species, sex, color variation, age, training status, stats (STR - strength, END - endurance, SPD - speed), wins/loses ratio, EXP and link to their heritage. Below the image displaying your beetle, their name is posted. Did you ever wonder how to rename your beetles or give them biography? Well, we'll get to that! Just scroll to the bottom of their panel, and you'll notice the bio section, then below this, on the left, you'll find the "Update Beetle" panel:

From there, you'll be able to rename your beetle, assign them to a different mound or even disable them from battling (if it's a male). If you'd like to secure your beetle to avoid chasing them off by accident, head over to the "Secure Beetle" panel, and click the button to secure them. Simple!

If you no longer want to possess a beetle, simply navigate to the "Get Rid of Beetle" panel and choose one of the following options intended for deleting beetles:

Your beetle will die the rollover after they turn 30, meaning when they turn 31 months (rollovers) old. Once they've died, they will turn into collectible amusement items in your hoard. They will match the colour and species of your beetle. Some of them can be crafted into rare applicators or decorations! They are able to be traded or used as toys for your pride members. If your larvae dies before it turns into an adult, you WILL NOT get a death item. Only adult beetles that died due to old age will turn into a collectible item. You may find your collectible beetles under your Hoard when you filter it's content to "Amusement" or "Craftable" (on some of them).

In order to see which dead beetle tokens can be Crafted into other usable items, please check our Crafting guide for more information!

Your adult beetles can breed in order to get more larvae of the same species! This is done on the Female's page, and she may only breed with a male of the same species. It is required that you have a beetle slot open in order to breed. Once your beetle's been bred, she'll display adorable heart symbols next to her image. She'll remain pregnant for only 1 rollover. 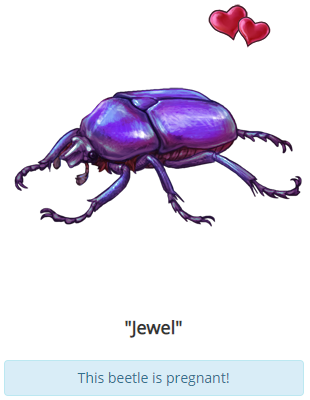 On the next rollover, you will notice that the heart symbols are gone in order to make space for the egg clutch icon next to your beetle: 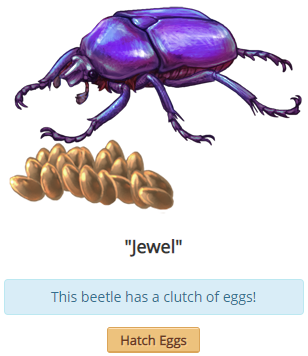 From that moment forward, you'll have time until the next rollover to hatch the clutch via a special button on this beetle's page in order to receive their offspring! You will receive 1-4 beetle larvae immediately, and they will be stored in your Unsorted Mound. If you don't harvest the eggs within the given time, the beetle will lose the potential offspring, so make sure to grab them before they're gone!

After harvesting the eggs, your Female beetle will receive a 10 day long cooldown (counted in rollovers). The babies will always get the species base stats, and a bonus from both parents’ stats. There is also a random chance that the babies will get +/- 3 stats when they are hatched. When breeding, the parents' colours are taken into account. However, it is possible for two beetles to produce larva with a completely different colour. There is a high chance for larva to be spawned with a common colour, a low chance for an uncommon colour, and a very low chance for a rare colour.

Training your beetles is important for experienced beetle battlers! Both Females and Males can train, however, only Male beetles can battle. The point in training Females is to carry more stats onto their offspring, while Males train for both having strong offspring, but also doing better in battles themselves. The bigger amount of stats your beetle has, the better chance of winning a battle he has, obviously!

You can train each beetle once per day for 10 SB. Training can be initiated by visiting Beetle Grounds (from Crossroads). Each activity gives different stats, and you may gain 1 stat point in total during a single training session. 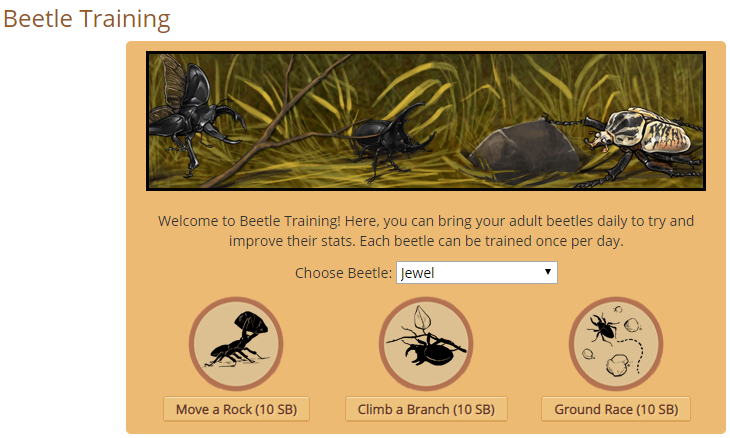 In order to read more about Beetle Training, check out the Beetle Battles guide!

Some notable items that can be used on beetles may be purchased in Monkey Business Shop:


Aging Pebble ages any larvae to 10 days (meaning it will become an adult on the next rollover), while the Beetle Sex Changer changes sex of the chosen beetle (or larvae) that was not bred or battled. Worth keeping these two items in mind!

Beetles need homes too! Beetle Mounds are where your beetles are kept, like your lions in their caves. The mounds are found under the caves, and any unsorted beetles will be in the unsorted section.

To create a mound, click + Create Mound, and that will take you to the next step of creating a new home for your beetles. You automatically unlock Mound slots as you gain Beetle slots – that’s 1 mound slot for every 3 beetle slots you have, and your first one is free! After that one, each mound will cost you 50 SB and 5 Underbrush, which can be found in any explore zone, or bought off other players.

You can check how many beetle slots you have in your lion’s information panel on your den – right next to how many lionesses you have, and under your territory slots. Each player starts the game with six (6) free beetle slots. To buy new slots, head over to the Oasis, from which you will be able to purchase them for 1 GB

each. Alternatively, go directly to your Den page by clicking on the "(+)" button and paying the GB

fee. On occasion, you can also earn up to ten (10) extra beetle slots by winning Beetle Battles!

Icons will show up beside your beetles’ name in their mound, like lion icons.

This only shows up for Larvae, and appears when they are 60% or more hungry.

This will only show up for female beetles if they are pregnant.

Shows if a female beetle has eggs.

This means that a beetle is on a breeding cooldown.

You can level your beetle up.

Means your beetle is for trade.

To put your beetles into their mounds, head back to your den page, and click the unsorted beetles section. Now you can see all the beetles that aren’t in a mound. To move them, simply check the checkbox next to the beetle/s you want to move, and select the appropriate mound from the drop down list. Too easy!