Your territory is the home for you and your pride! It's important to make sure you have enough room for everyone so they can have plenty of space to grow. This page explains what territory is, how to expand your territory, how to manage it, and how lions fit into territory slots.

If you have reached your limit with territory, you will not be able to receive any lions via trade or transfer, nor will you be able to claim lionesses in Explore, or claim lions from any other site features that offer them. If you need more space, you must get rid of an adult lioness, whether by chasing, killing, nature reserving, selling, etc. You may also continue to expand your territory, whether through PVP or by paying for more territory.

Note that managing your territory is very important. It's easy to get lost in the thought of hoarding dozens of gorgeous lions, and you may end up with more lionesses on your plate than you can manage! If this happens, you may end up having lions run away due to low mood, hunger, or overcrowding.

Each pride leader starts off Lioden with two (2) free territory slots. In order to expand your pride, you will need to expand your territory. There are two ways to do this: fighting via Player vs Player (PVP) and paying

GB. You can reach a total of 40 territory slots without utilising premium currency. You can fight for all of 40 of your territory, or you can pay for 20 and then fight for 20. Note that you can only buy up to 20 territory for

SB. Once you reach 20 territory, whether via PVP or paying for them, you must then PVP for your final 20 "free" territory slots.

If you wish to expand your territory for free, you can do so through PVP. PVP, or "Player vs Player", is an option that can be found near the bottom of every player's den page, beneath their caves and above their allies table.

You can fight a player for Skill, Experience, and Territory.

A good way to find other pride leaders that are near your level would be to go to Crossroads, then click on Territory near the bottom of the map.

You'll come across this page, showing you a map of your territory and the territories of other leaders that surround you. 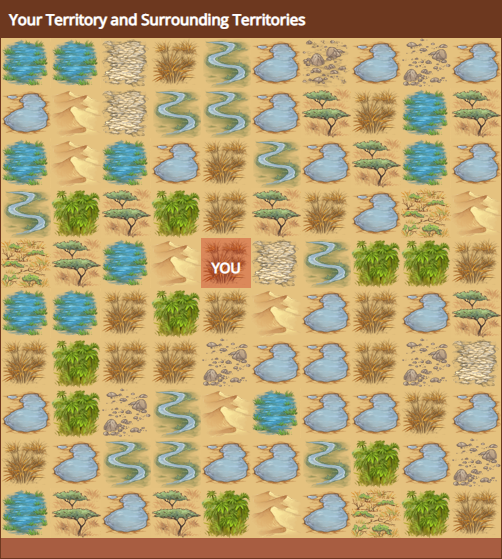 Every pride leader within these surrounding tiles is around your level, with the lowest leaders being two levels below you. This is a fast and efficient way to find leaders that might be easy enough for you to defeat in PVP. You'll want to double-check each leader's total Stats and their Skill stat before you decide to fight them! You can absolutely defeat a pride leader with higher stats than your own, but it won't be easy; however, ensuring your leader's Skill stat is higher than your enemy's will get you one step closer to victory.

Okay, so let's pick an opponent and actually fight them. Before we begin, though, be sure you have at least 20% energy and that your leader is at or below 80% hunger—you can't fight on an empty stomach!

You attacked this lion for territory and you won!
+1 territory space
+80 to 120 experience
+6 impression progress

Wow, you won! Great job! You've also lost -20% energy, an unfortunate downside to PVP. Not a bad price to pay for another territory expansion though, hm?

Now, if you weren't so lucky, you'll see the following message.

You attacked this lion for territory and you lost!
+10 to 30 experience

You can say goodbye to that effort (and your energy), but you can always try again after a 2-hour cooldown.

If you want to take the easy way out, you can pay SB to expand your territory slots by clicking on the (+) next to your territory count on your den page. Note that when buying territory, each slot increases in cost by 50


Once you hit 40 territory, the only way to expand your territory further is by paying with

You can have an unlimited amount of territory. After Slot #252, all slots purchased have a set price of 10

If you have reached your maximum amount of cubs, you are unable to breed your lionesses as you will not have any room for more cubs to be born. Your lionesses can give birth to an amount of cubs that will push you over your maximum amount, but you will be unable to breed until some cubs are abandoned, chased, killed, nature reserved, traded off, or removed from your account in any manner.

Keep in mind that the above table is only an example of how broodmothers are calculated. The only limit to how many broodmothers you can have is determined by your territory amount.

In order to keep an adult male lion that is 2 years of age or older, you must first have an available (sub)male slot. Submales do not take up regular territory slots. They can only occupy submale slots. You cannot manually place a submale into a submale slot. Once a male lion ages up to 2 years, he will then automatically occupy an available submale slot. If no available slot exists, then he will run away upon aging up. You can reclaim submales that run due to lack of space after expanding your submale slots.

Unlike territory, which you can earn through PVP, the only way to "earn" submale slots is by purchasing them. As there isn't usually a point to owning more than one submale at a time, submale slots are priced much higher than territory slots and will quickly jump up in price between slots.

If you wish to expand your submale slots, click on the (+) next to your male slot count on your den page.

You can have an unlimited amount of submale slots. After Slot #5, all slots purchased have a set price of 15

Frozen/immortal lions do not take up territory, cub slots, or male slots like living lions do. They occupy frozen slots! Frozen slots are used to hold any lions that you might make immortal by use of a jellyfish. There are four total kinds of jellyfish on the site, and three of them are related to freezing lions: Canopic Jellyfish, Jellyfish, and Turritopsis Jellyfish.

Use
Use this on any deceased pride member stored within your Pride Dynasty to bring them back within your territory as a frozen/immortal lion.
How to Get
* Purchase from the Anubis Temple, Bast Temple, and Seth Temple for 150

Use
Use this on any living cub aged 0 months to 11 months to permanently turn them into a frozen/immortal lion.
How to Get
* Jackpot Reward from Slots.
Turritopsis Jellyfish

Use
Use this on any living adolescent or adult lion aged 1 year to 16 years to permanently turn them into a frozen/immortal lion.
How to Get
* Purchase from the Oasis for 5

Freezing a lion will immortalise them and cause them to lose their personality, sex, and stats. They will never age, gain hunger, or lose mood. Frozen lions cannot be assigned any roles, breed, cub train, hunt, patrol, or protect cubs. They also cannot be placed into raffles as prizes, but they can be put up for trade and transferred to other players. You can customise and decorate your frozen lions at any time.

Once you have frozen a lion, you have up to one (1) hour from the time that you froze them (or until rollover) to unfreeze them. Unfreezing a lion will remove their frozen/immortal status, placing them back at the age they were previously (with all other attributes [personality, stats, .etc] unaffected), as well as refunding the jellyfish used back to your hoard. If you do not unfreeze your lion within the provided hour timeframe, then you will not be able to unfreeze them at all. They will remain frozen permanently. If you no longer wish to retain your frozen lion, you can retire them to your Pride Dynasty at any time for a fee of 10

SB, so long as they are not secured. If you do not wish to pay, and you instead want to permanently get rid of your lion, you can kill them or send them to the nature reserve.

Unlike territory, which you can earn through PVP, the only way to "earn" frozen slots is by purchasing them. As frozen lions are essentially treated as pretty (albeit useless) trophies, frozen slots are priced much higher than territory slots and will quickly jump up in price between slots.

You can have an unlimited amount of frozen slots. Slot #1 is free, Slot #2 costs 5

GB, and each subsequent slot that you purchase afterwards increases by +5

GB. The table above is only an example of frozen slot pricing up until Slot #20.

As was briefly touched upon earlier within this page, lions can and do leave your pride, whether due to low hunger, low mood, or overcrowding. That being said, the only lions that are at risk of running away are adolescents that are aging up from 1 year 11 months to 2 years (as they will become adults once you rollover, then leave your pride due to lack of space), non-custom adult lionesses, and adult submales. Cubs and adolescents 1 year 10 months of age or younger are not at risk of leaving. Frozen/immortal lions and custom lionesses made in the Oasis can never leave your pride due to neglect. If you are full on territory and/or submale slots and you have adolescents that will age up to adulthood upon rollover, you'll want to make room for them, otherwise they will leave due to overcrowding once they age up if there is not adequate room to house them.

Lost a precious lion that you really, really want to get back? Not to worry! When a lion leaves for any reason, you have up to seven (7) real life days to reclaim them, starting from the day that they left your pride. The limitation is to conserve server space—you can probably imagine how many lions would sit taking up space on the site's server because their owners stopped logging in and let them "sit" in the reclaim area. To combat this, lions that have not been reclaimed within seven (7) real life days of running away will be permanently deleted. It costs 200

SB to reclaim one adult lion. If your lions left due to overcrowding, you may need to expand your territory or male slots before attempting to reclaim your lions.

Lions that have left due to neglect or lack of space will go into a temporary holding area before they are permanently deleted. You can find this area at the bottom of your den page, below your caves and beetle mounds and just above your allies.

It is important to keep in mind that the reclaiming system operates based on real life days, NOT rollovers. If your lions have left your pride due to neglect or lack of space and you refrain from rolling over, the days you have to reclaim them will still go down each day at 2:05am Lioden time. The reclaiming system functions independently from personal rollovers. Again, if you do not reclaim these lions within seven (7) days, they are permanently deleted from the site and can never be retrieved.