This page contains information regarding a retired event that no longer takes place on this site, hence the
"(Retired)" tag. Please view the content below at your own discretion. The content below is no longer relevant to Lioden and has only been uploaded for archival purposes.

Tigons were the second hybrid mutation introduced to Lioden. They are a cross between a lioness and a male tiger.
You can read more about them on the Tigons page!

This page details the mini-event on Lioden known as Tigon Hype, which lasted since September 14th 2018 till October 31st 2018.

Starting on September 14th 2018, each passing week introduced a new explore encounter that featured a mysterious tiger, whose intentions became more obvious as time passed by. Would he settle down in the lands ruled by lions? Would he find a playmate…?

These encounters could be seen in Explore until 2019. It was a good time to be on Lioden!

"The Tigon hype train has launched! From now on, every Friday, a new Tiger-related encounter will appear in explore, until we post official news post with a Tigon update and official release! HYYYYPE!
The encounters start slow and slowly get bigger and bigger to build a whole story! Some encounters are just fun text, some can give you something cute! Perhaps the last one, on the day of the launch… could even turn out to be a lucky omen?"

"Some of you may have already seen a rather orange fellow lurking around in Explore. It seems he's getting a bit more frequent and upfront with his encounters… hmm!"

"That strange, striped feline is getting pretty courageous, showing his face more frequently as time passes. Do you think he'll be friend or foe?

Battle with the Lonely Tiger 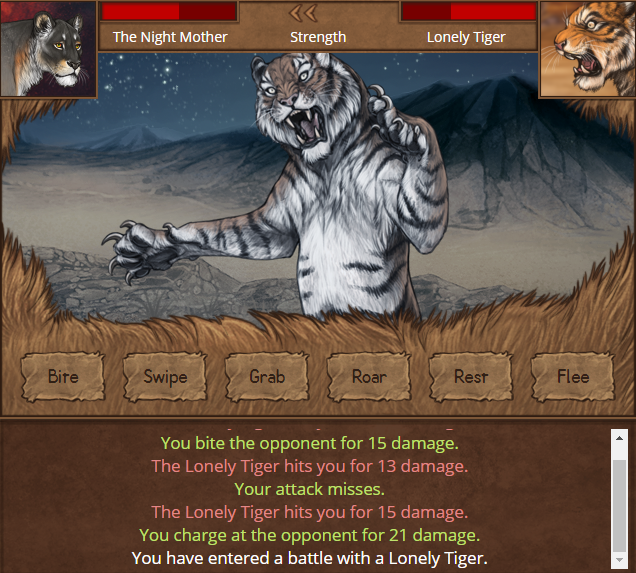 "Really, now… this is getting ridiculous! If this guy wasn't so handsome and charismatic, his striped butt would be out of Africa in a heartbeat. The audacity of some felines!

But wait… Is that mooing we hear?

Additionally, on this day, Xylax's king was replaced with a tiger resembling the Lonely Tiger from explore!
Click the image below to visit their page. 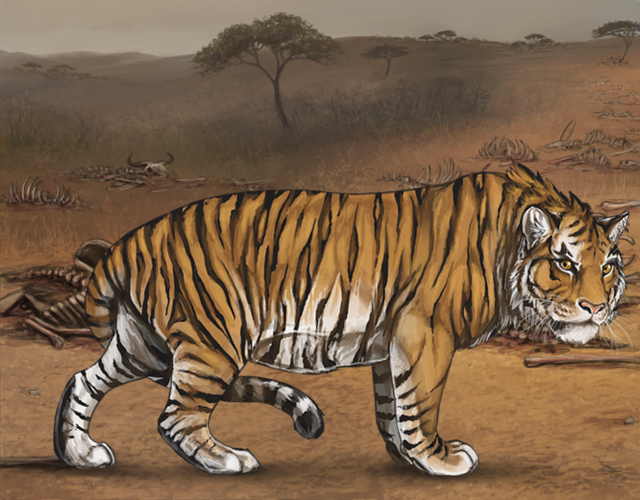 "Many moons ago this comrade ran away from a scary prison called zoo. He roams the forests of Africa to find a playmate.He's not for studding! He cannot produce tigons, he's here just as part of lore :) It's basically an NPC"

Ashkarn cannot be studded to, and is the default father of every first generation tigon. He cannot actually breed with any lions, and his appearance is purely cosmetic.

"Also, have you noticed this week's Tiger encounter in explore? It has a chance to drop one or two unique items! A Siberian Friend decor and the Tiger Woods background."

Below is a preview of a lioness with the Siberian Friend and Tiger Woods items equipped. 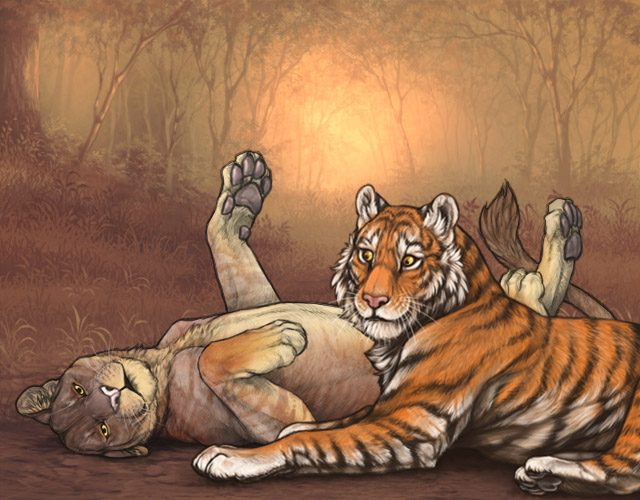 "What a fabulous lioness! I wonder where she got that gorgeous striped pelt from?" 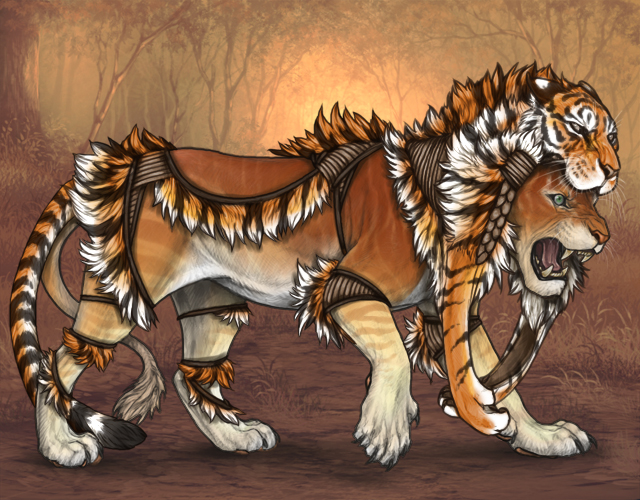 Our Siberian pal has decided to keep to himself a bit this week - no new encounter is being released, but we hope you all enjoy the new Halloween feature! If you're as hyped about tigons as we are, make sure to check out the Tigon Hype page on the official Lioden Wiki!

No new explore encounter was released this week… WAS THAT A SIGN!!!????

TIGON RELEASE!
Check out the official news post regarding the tigon release! 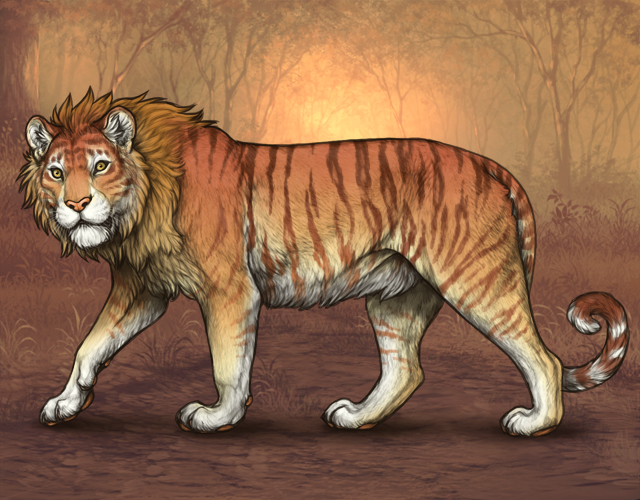 Tigons will crop up in a similar fashion to Leopons. They can be bred very rarely as a First Generation Hybrid where your lioness has wandered off and had an encounter with a tiger. The use of Cotton Root Bark to induce a miscarriage, as well as giving your lioness a GMO Cow before attempting to breed, will increase the chances of breeding a mutation - which now includes Tigons.

They can be bred from any possible pairings between your lioness and a stud.

All First Generation Tigons will be bred with the same appearance as above. White Undersides is a custom marking available to apply in the Oasis, while Mottled Stripes is the Tigon-exclusive hybrid marking! It functions exactly the same as Mottled Rosette, thus it cannot appear in RMAs, and has a low chance of passing down to offspring. Mottled Stripes will only be available in slot 8.

A new explore encounter has been added which has a dynamic option attached to it. Most of the time, you will only be able to [Observe] the encounter, but sometimes a green button will show up allowing you to [Arrange a Date (!)].

Arranging a date between your lioness and the tiger will enable a boost on your account.

The encounter boost works in the following way:

This boost will only be available until 30th November 2018, after which time the button will be removed and the encounter will remain until the end of the year along with the other tiger encounters.

The boost stayed upon rollover and through retiring kings. It was a permanent effect until the player successfully bred with a lioness. Failed breedings did not remove the effect—only a successful one. Players could get the boost as many times as they had the option to. It was not limited as to how many times one person could come across the encounter.
The boost stopped being awarded on November 30th, 2018.

Several new items were added when our tiger friend was roaming Lioden. As the encounters have disappeared from Explore, the rewarded items listed below are planned to be reintroduced in future community raffles. 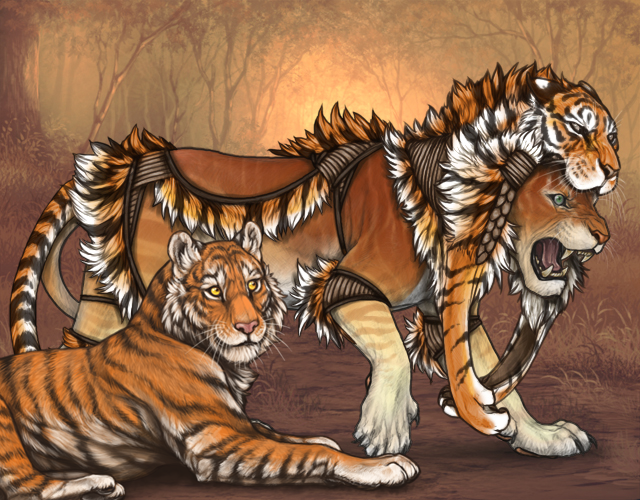 Click on the images to view them at full size.

These sketches were shared with the community by Xylax (#4) when Tigons were confirmed.
Click on the images to view them at full size.